The Literature Review: Searching the literature

This video takes you through the steps to using the Library Search to narrow down and identify which Library databases are best suited for your research topic.

Use Library Search to identify relevant databases from Victoria University Library on Vimeo.

Google Scholar provides a simple way to broadly search for scholarly literature. It can be a good starting point to gain an understanding of the bredth of research published on your topic.

Many VU library databases can also be searched through Google Scholar. Fulltext journal articles and research papers can be retrieved by clicking on the "Find Fulltext@VU Library" link when it appears to the right of your search results.  This will happen automatically while on-campus but may need to be set up as "Library Links" under Scholar Settings to work from off-site.

Steps for searching the literature

The ‘VU Search Planner’ provides guidance in search planning, using database features (wildcards, truncation etc.) to find resources, and then platform-specific advice on saving searches. Download and use the guides.

Download this 'Planning your Search' document and use it to develop a search as you look for library resources.

Learn how to use enhance your database searching with these search tips using truncation, wildcard, connectors, phrases and proximity database features.

Discover how to save your search results on the major VU database journal article platforms. 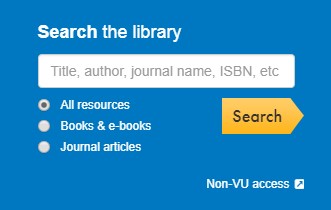 If you are not sure which databases are relevant to your subject area, use the Browse by Subject section on the Library's Databases A to Z page or make an appointment with your College Librarian

Once you have decided on which database(s) to use

Research for your literature review can be categorised as either primary or secondary in nature. The simplest definition of primary sources is either original information (such as survey data) or a first person account of an event (such as an interview transcript). Whereas secondary sources are any publshed or unpublished works that describe, summarise, analyse, evaluate, interpret or review primary source materials. Secondary sources can incorporate primary sources to support their arguments.

Ideally, good research should use a combination of both primary and secondary sources. For example, if a researcher were to investigate the introduction of a law and the impacts it had on a community, he/she might look at the transcripts of the parliamentary debates as well as the parliamentary commentary and news reporting surrounding the laws at the time.

Examples of primary and secondary sources

Can something be a primary and secondary source?