Follow the steps to avoid plagiarism. Capitalised words are defined below the flowchart.

Remember to check with your lecturer which referencing style to use, keep notes as you go so you are not rushed to finish your work, and if you are asked to use Turnitin speak to your lecturer for further information. 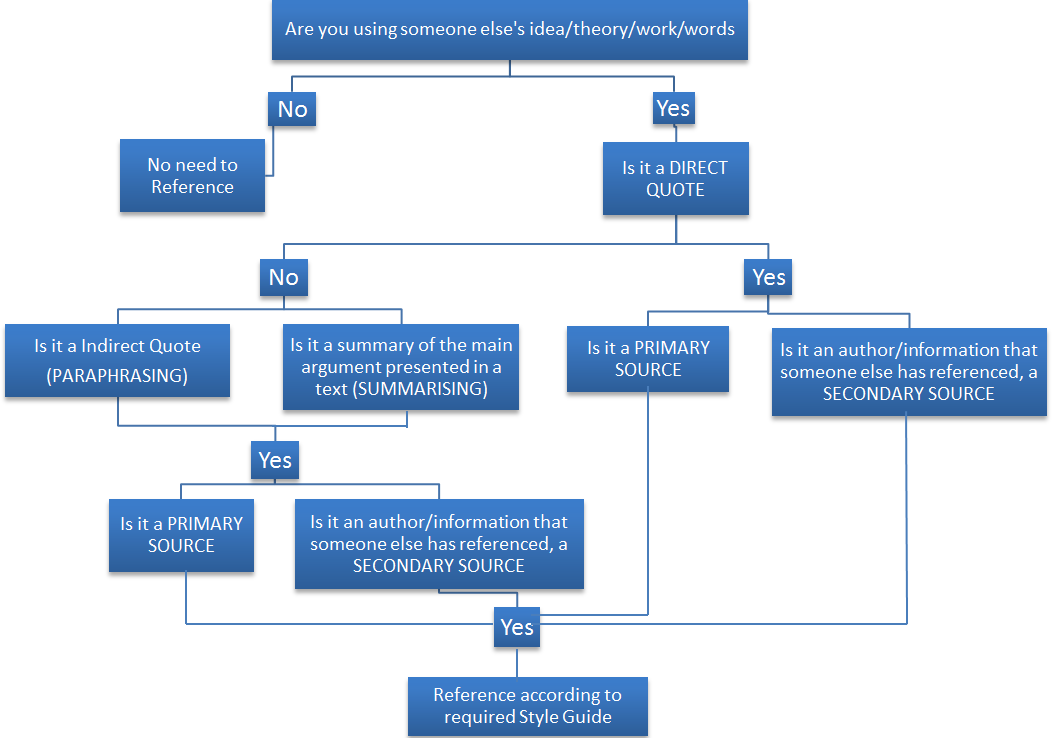 A direct quote is one that is copied exactly as presented by the original author. This would include the same wording, punctuation, diacritical marks etc.

To signal that the text is not yours, a direct quote is placed in inverted commas or quotation marks. For example:

Jones (2012, p. 23) reported that 'listening to classical music for approximately 30 minutes each day had a positive effect on the learning outcomes of children between 1-4 years old  with Asperger’s syndrome'.

It is not advisable to use too many direct quotes in your writing. They should be used sparingly. It is generally better practice to paraphrase or summarise as this demonstrates your understanding of the work of others and your skill as a writer.

Paraphrasing refers to rewriting someone’s ideas using your own words and is used frequently in academic writing. Paraphrasing is more than changing just one or two words and some punctuation. It is about using your own words to represent the original text. Of course, you still need to reference the source to avoid inadvertently plagiarising someone’s work. For example:

Jones (2012) reported in his study that preschool aged children with Asperger’s syndrome were noted to have positive learning outcomes after listening to classical music for a period of 30 minutes each day.

Paraphrasing is any easy concept to understand but difficult to do well, particularly when paraphrasing work that is complex and dense (i.e. technical terminology).

Summarising is used in academic writing to encapsulate, synthesise or focus on a main argument that is presented in a text.  For example, a whole chapter on the advantages of bilingual speakers over monolingual speakers may be summarised into a short paragraph that explains the core arguments presented. When you summarise, it is similar to paraphrasing in that your own words are used. Also, sources must be referenced.

A primary source can be a written document such as a book, article, letter or speech. Alternatively it could be a creative piece such a video, poem, artwork, piece of music etc.

Remember to reference the source.

A secondary source is one that interprets, references, analyses or draws on a primary source. For instance, writers of a journal article may cite the work of a researcher mentioned in a journal article they have used for a literature review but they may not necessarily have read that researcher’s work for themselves. The writers would need to cite the secondary source. For example,

Piper (cited in Jones, 2012) also undertook a range of studies involving preschool aged children who were diagnosed with Asperger’s syndrome and their reactions to various musical genres.

The flowchart is a decision-tree posing answers leading to yes or no responses. It provides guidance as to whether you need to provide a reference in your writing.

If the answer is NO several questions are posed all leading to the answer of YES, you do need to reference according to the required Style Guide. These questions are 'is it an indirect quote (paraphrasing)?', 'is it a summary of the main argument presented in a text (summarising)?', 'is it a primary source?' and 'is it an author/information that someone else has referenced (secondary source)?'.

If the answer is YES to the question 'is it a direct quote' two questions are posed which lead to the answer YES, you do need to reference according to the required Style Guide. These questions are 'is it a primary source?' and 'is it an author/information that someone else has references (secondary source)?'.

In summary, you need to reference according to the required Style Guide if you are using someone else's ideas, theory, work or words.