Ended: 1958, when it was renamed Footscray Technical College

Established for the purpose of "giving instruction in Applied Science, Engineering, Management, Art, Business Studies and Trade", Footscray Technical School was established by the Education Department towards the end of 1915, on the corner of Buckley and Nicholson Streets Footscray. 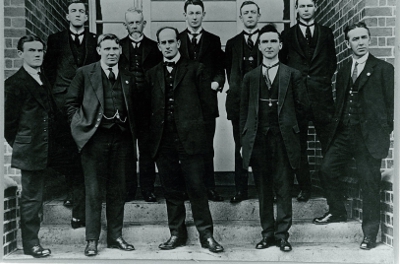 First teachers of Footscray Technical School, 1916. Hoadley is front, centre, with Treyvaud to his left.

The school grew rapidly, and in 1920, became the first Education Department school to offer full diploma courses. Both the day and night classes were extremely popular. Girls were first allowed in night classes in 1936 with the introduction of dressmaking and secretarial classes - but were not allowed as day students until 1960.

More building was undertaken in the 1920s and 1930s; however, it was soon evident that the site at Nicolson Street was far too small for the growing school, and students were turned away due to lack of space. It was therefore with much relief in 1941 that the foundation stone for the Ballarat Road campus was laid, with the buildings ready for occupancy in 1943. In time, the Ballarat Road campus was known as the Junior School, with the Senior School remaining at Nicholson Street.

In 1953, a fire at the Ballarat Road Campus destroyed many student and administrative records dating back to 1916. The culprit was never discovered, although the police suspected that it was a disgruntled student.