Established: 1991, when Footscray and Newport Colleges of TAFE merged

Ended: 1995 when it was renamed Western Melbourne Institute of TAFE

With the merger, WMCOT became the largest provider of TAFE in the West of Melbourne, despite the newly formed Victoria University of Technology also providing TAFE programs. Mike Smith, who had been Acting Director of Footscray College of TAFE immediately before the merger, remained as Acting Director of WMCOT before being confirmed as Director in 1992.

In 1992, WMCOT acquired the site of the former Sunshine High School on Ballarat Road, Sunshine (now the Sunshine Campus). After refurbishment and renovation, it was opened by the then Premier of Victoria, Joan Kirner, in September 1992. 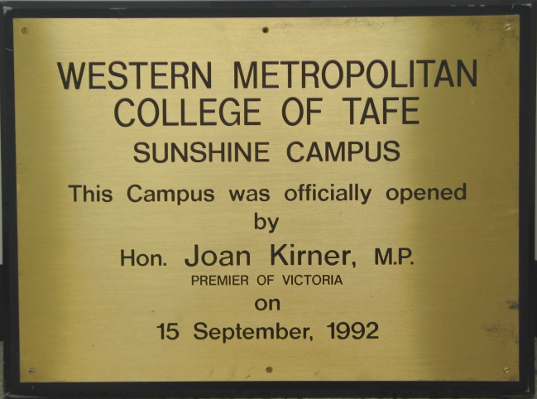 Plaque commemorating the opening of the
Sunshine Campus, 15 September 1992

Activity continued at a fast pace, and in 1993, both the Melbourne College of Decoration (painting, decorating and signwriting programs) and Flagstaff College of TAFE amalgamated with WMCOT. This meant WMCOT now offered a wide range of courses across the West of Melbourne and in the central business district. This was further enhanced with the acquisition and development of a campus in South Melbourne (City Road, South Melbourne, the site of the former J H Boyd Girls' School) in 1994. WMCOT was now the second-largest TAFE provider in Victoria, offering courses as diverse as hairdressing, building and construction, engineering and business studies. It also offered a variety of preparatory and short courses for the community.

In January 1995, a new Council and Constitution for the College came into effect, following amendments to the Vocational Education and Training Act. Also in 1995, WMCOT purchased a twelve-storey building at 225 King Street, in the Melbourne CBD. The Flagstaff Campus, on Latrobe Street, was moved into the new King Street Campus following its refurbishment.

Following a consultation process during 1995, the College was renamed to the Western Melbourne Institute of TAFE from 1 January 1996.

The Archives holds the following records relating to Western Metropolitan College of TAFE: