Established: 1992, when Western Institute and Footscray Institute of Technology merged

Located: 11 campuses in the Melbourne CBD and across the West of Melbourne 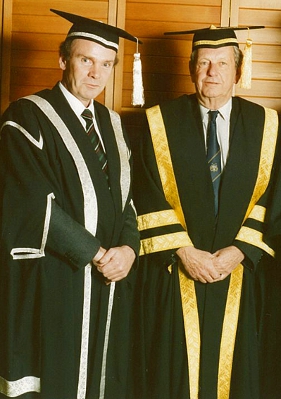 VUT was always intended to be a dual-sector university, offering both TAFE and higher education qualifications. On its establishment, it delivered courses across four campuses: Footscray (Ballarat Road campus), St Albans, Melton and Werribee. In 1993, this was increased with the acquisition of 300 Flinders Street in the Melbourne CBD. Also in 1992-3, negotiations were undertaken to acquire the former Caloola Training Centre at Jackson's Hill, Sunbury. In early 1994, VUT acquired the site, with refurbishments and upgrades conducted in 1994 and students first arriving at the start of 1995.

1994 also marked the establishment of an affiliation with the Melba Memorial Conservatorium of Music. Music students were located primarily at the Sunbury campus, which was also used for performances and concerts. This affiliation continued until 2008.

In late 1997, following a ministerial review of the provision of TAFE services throughout the Melbourne metropolitan area, it was decided that the Western Melbourne Institute of TAFE (WMIT) was to merge with Victoria University of Technology. A Merger Implementation Committee was established, containing representatives from both institutions, and the merger occurred on 1 July 1998.

The merger with WMIT meant that VUT was now the largest tertiary education provider in the West of Melbourne. It also meant that there was a sudden increase of both students and campuses, with VUT now also having responsibility for the Footscray Nicholson, City King, South Melbourne, Newport, Sunshine and Yarraville campuses.

VUT further expanded its activities in the Melbourne CBD with the acquisition of 301 Flinders Lane in 1998, and in 2000, 283 and 295 Queen Street. The Queen Street campus was set up to house the newly established degrees in Law and the Sir Zelman Cowen Centre.

In 2001, Justice Frank Vincent became Chancellor, and in 2003, Elizabeth Harman was appointed as Vice Chancellor. The 2000s also saw a reduction in the number of campuses, with Berry Street (Yarraville) closing in 2004, South Melbourne in 2005 and Sunbury in 2009.

In 2005, the University name was officially changed to Victoria University, reflecting discussions around the continuing relevance of the use of "Technology" as part of its name.

In 2006, Victoria University celebrated the 90th anniversary of the establishment of the Footscray Technical School by publishing a book called 90 Years 90 Legends, identifying 90 people who had played important roles in the development of VU and all of its predecessor institutions. 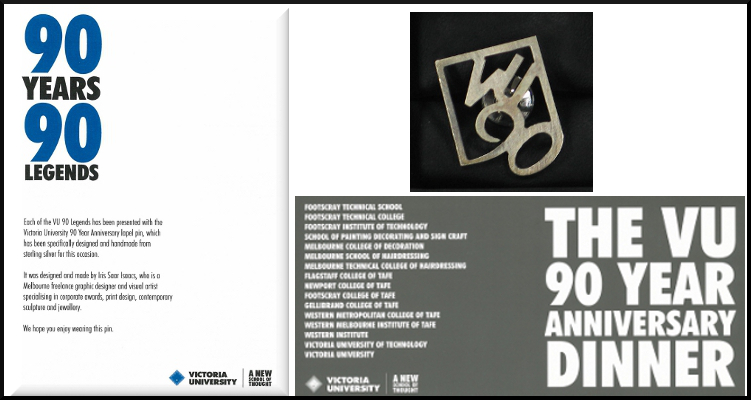 Items from the 90 Years 90 Legends celebration,
including dinner invitation, commemorative pin and thankyou to participants

After being Chancellor for over eight years, Frank Vincent retired in 2009. George Pappas was installed as the new Chancellor in 2010. In 2011, Peter Dawkins was appointed as the new Vice Chancellor of Victoria University.